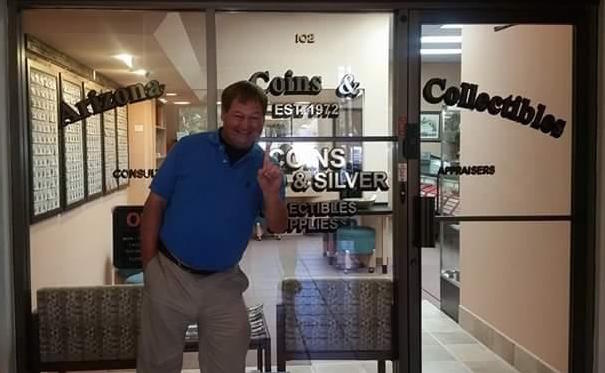 Peter is a regular speaker for the following groups:

Need a speaker for your coins or collectibles related event? Get in touch with Peter!

Arizona Coins and Collectibles was started by Peter Spooner who was the head numismatist for the prior company, American Stamp and Coin.

Mr. Spooner has been involved in coins in the Tucson area for over 45 years. He joined the Tucson Coin Club in 1967, and the American Numismatic Association in 1968. As a junior, Mr. Spooner was involved in the Junior Tucson Coin Club and in 1972 served as President of over 30 young numismatists. Mr Spooner displayed his coins extensively through out Arizona, California and several other states and won numerous awards.

At University of Arizona, Mr. Spooner used his knowledge to help catalog and combine the numerous coin collections located at the Arizona State Museum. Mr. Spooner also worked with Hal Birt, Jr. and helped in the publication of the 1980 Arizona Token Catalog. Later Mr. Spooner did research on coin grading, and used his findings in completion of his Masters thesis at University of Phoenix.

Mr. Spooner also worked with Numismatic Fine Arts in Los Angeles California and Allstate Coin in Tucson, handling many rare ancient and United States coins. Mr Spooner’s knowledge of ancients and foreign enabled the purchase of the Commador Matthew C. Perry collection for Allstate Coin. As owner of Arizona Coins and Collectibles, Mr. Spooner offers a comfortable atmosphere for the collector / investor to expand their collection and discuss their future collecting goals.